I was rummaging through my garage the other day and came across a bag full of old photos which were taken a few erm….. years ago ( Early 1990’s). The one here was taken by a guy called Dean Chalkley http://www.deanchalkley.com/

I clearly remember this shot being taken and Dean approached me asking if he could do so. I thought he was a bit of a tit as he didn’t have a flash on the camera and the place was a bit dark and dingy (It was a mini convention at what was Rockworld in Manchester). I did point this out to him but he did his big toothy grin and said it would be fine and he would send me a copy. Well yours truly ended up chewing his own foot because this was the result. Dean went on I believe to be the Kodak student of the year and now photographs the rich and famous all over the world 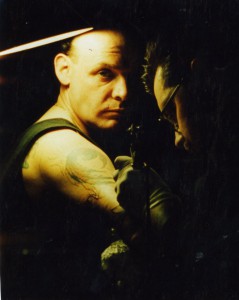